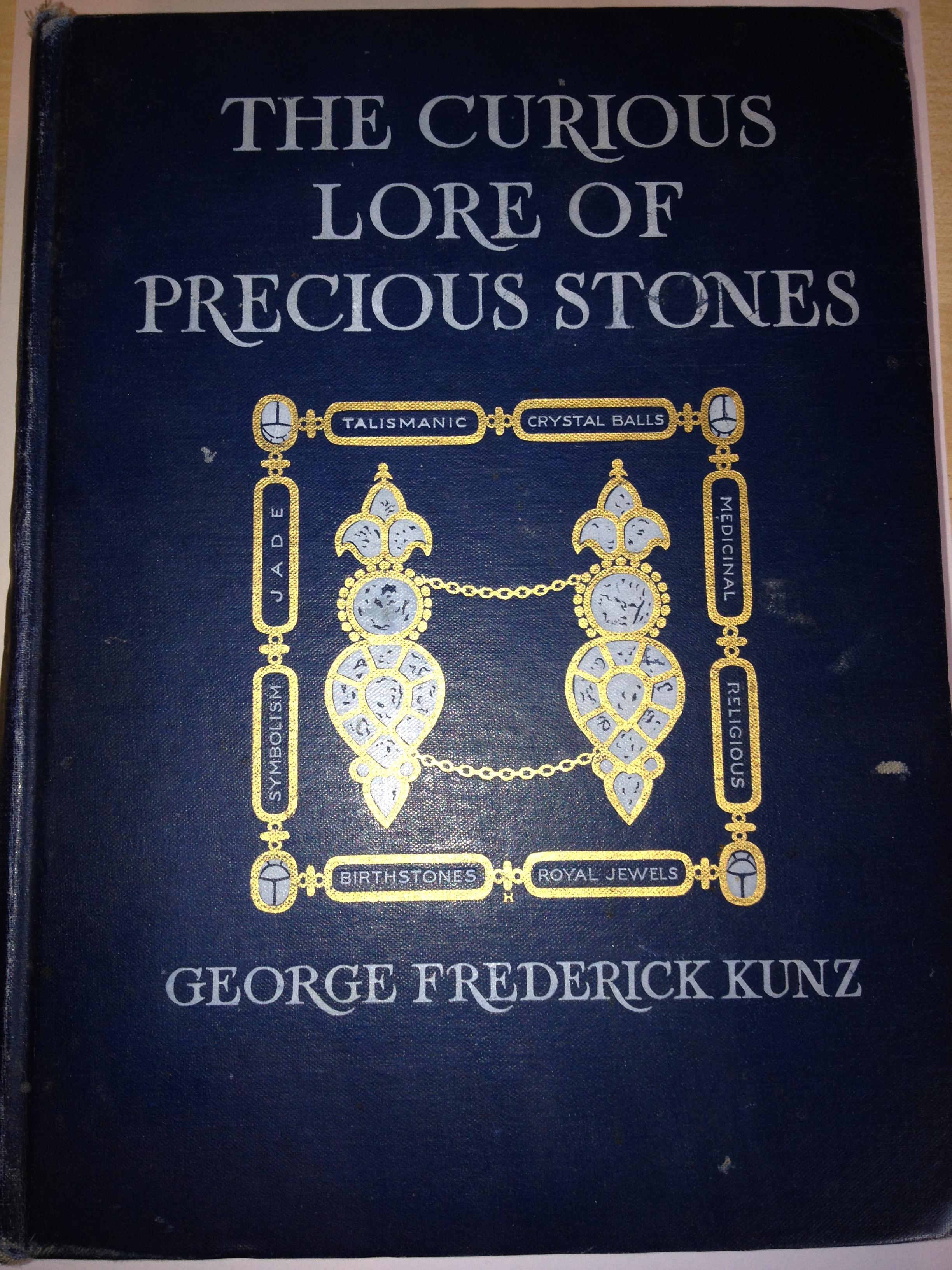 THE CURIOUS LORE OF PRECIOUS STONES (1913)

From time to time, in a quiet moment, I select a book to read.  I particularly like Victorian and early twentieth century adventure tomes.  It’s the boy in me that has led to a small collection of the H Rider Haggard adventures for example.

In the gemmological field there are a number of heroes whose escapades would give Allan Quatermain  a run for his money, or gold.

Jean-Baptiste Tavernier comes immediately to mind. The modern version double volume of his travels in India I have in my collection. However today I reach for my 1913 copy of The Curious Lore of Precious Stones by George Frederick Kunz.  Tattered, bruised, falling apart it still offers an insight into the state of jewellery history and gemmology over a hundred years ago. For me it is a tangible link with the past with two of my favourite subjects.

Kunz was born in New York City 29th September 1856. He had a very keen interest in minerals from an early age and by his teens had a collection of over four thousand items. He did not attend college but taught himself mineralogy from books and carried out field research. It was his expertise in mineralogy that secured him a position with Tiffany and company.  His knowledge, dedication and enthusiasm saw him become vice president by the age of just twenty-three.

His name continues in the world of gemmology today due to his discovery of a variety of Spodumene now known as Kunzite.

The book covers a myriad of subjects. From superstitions associated with particular gems, religious uses and therapeutic properties.

To quote from the text, ‘Rock crystal also was found to possess a strongly stimulating influence, for if put in the hand, it aroused the subject from half slumber, and if placed on the pit of the stomach, it had the power to awaken the seeress from a somnambulistic trance, while at the same time an aromatic odor (sic) was diffused around’.

Of amulets he wrote much, ‘One of the special uses of amulets was for seafaring people…all who went down to the sea in ships were greatly in need of protection from the fury of the elements…’. The book is full of truly bizarre images.  One of my favourites is that of a type of mythical airship ‘..above the figure were to be set coral-agates (sic) , supposed to possess such magnetic powers as to keep the craft aloft’.

There are some fantastically colourful plates throughout the book, particularly emphasizing the diversity of gemstones.

For those interested in the science of gemmology there are some interesting, and slightly frightening experiments noted.  The phosphorescence of a diamond exposed to ultra violet light comes to mind. I can’t imagine that the eye safety procedure that we adhere to today was ever followed then. One outstanding colour plate, and one I refer to in talks, is that of the Maharaja Runjit Singh, Ruler of the Punjab, 1791 to 1839.  The Maharaja is seated against a large red cushion, around his neck and at his waste are rows of large natural pearls. In his hand he holds a necklace of emerald beads, said to protect against poison.  Sadly it is believed that he, and his successor, died of poisoning. The Maharaja was the founder of the Sikh Empire and at one time the possessor of the Koh-i-Noor  diamond. The book is full of intrigue and mystery.  The principal mystery for me is who owned the book in 1935.  Whoever he was his friend called him the ‘Uncrowned King of Cyphers’. And signs off with a sentiment that I agree with ‘Friendship is more worthy than many jewels’.