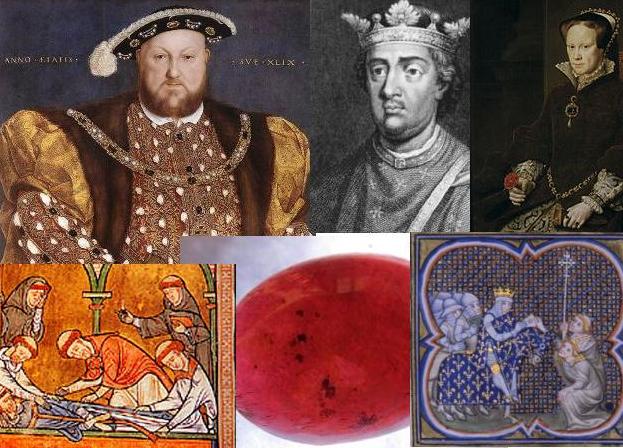 The Regale of France
Like most amateur historians I love a mystery. ‘The Three Brothers’, ‘The Great Mogul’ and the many other jewels and gemstones whose current whereabouts is unknown. One such mysterious gemstone is the ruby cabochon ‘The Regale of France’. From repentant Kings to a particularly non-repentant King, the ruby is embroiled in the bloody history of this country.
The first occurrence of the gemstone appearing on these shores is as a gift of King Louis VII to the Shrine of St Thomas á Becket at Canterbury. In August 1179 King Louis, who was in very poor health, visited Becket’s Shrine as part of a five day pilgrimage. He was accompanied by the repentant King Henry II of England, whose conflict with Becket had led to the Saint’s murder by his knights in 1170.
‘After his penance King Henry offered at this tomb four marks of pure gold and a silk hanging to adorn it ; also £40 annually for lights to be kept burning around the shrine. Louis VII., the first French king to set foot on this island, came to implore St. Thomas’s intercession for the recovery of his son, and presented to the shrine the celebrated jewel known as the “Regale of France,” his own golden goblet, and many other gifts.’ (1)
The Regale de France became an important feature on the Shrine. However the ruby’s nature has often been debated; confirmed as a ruby by a the account of visiting Venetian in 1500;
‘The account of a Venetian who visited the shrine about the year 1500. “The tomb of St. Thomas the martyr, arch- bishop of Canterbury,” he says, “exceeds all belief. Notwithstanding its great size, it is wholly covered with plates of pure gold ; yet the gold is scarcely seen because it is covered with various precious stones, as sapphires, balasses, diamonds, rubies and emeralds ; and wherever the eye turns something more beautiful than the rest is observed. Nor, in addition to these natural beauties, is the skill of art wanting, for in the midst of the gold are the most beautiful sculptured gems both small and large, as well such as are in relief as agates, onyxes, cornelians and cameos ; and some cameos are of such size that I am afraid to name it ; but everything is far surpassed by a ruby, not larger than a thumbnail, which is fixed at the right of the altar. The church is somewhat dark, and particularly in the spot where the shrine is placed, and when we went to see it the sun was near setting and the weather was cloudy ; never- theless I saw the ruby as if I had it in my hand. They say it was given by a king of France.’ (2)
Described as a diamond in 1554;
‘The oft-mentioned jewel given by the King of France and called a ruby by the Venetian pilgrim, is described by the Bohemian Ambassador, in 1446, as “a carbuncle that shines at night, half the size of a hen’s egg” ; but it was described as a diamond when it came unto the possession of Queen Mary in 1554. This gem, the “Regale of France,” was too well known to be confused with any other jewel, and it was probably owing to the prismatic colours given forth from this exceptional diamond in the gloom of the chapel that we have these discrepancies in name. When fastened to the new shrine the figure of an angel was made in gold, pointing to the stone to attract special attention.’ (1)

I disagree with the above. There is a considerable difference in appearance between a ruby and a diamond. I feel that there is a good possibility that the gemstone in Queen Mary’s collar was not the Regale of France, but a diamond of a similar title.
So satisfied that the gemstone is a ruby one has to next trace its journey, picking through the minefield of historic journals, many biased and inaccurate.
Evidence is assigned to the ruby’s journey to the Royal Treasury when Becket’s shrine was destroyed in 1540 under the orders of King Henry VIII, in vengeance for his ancestor Henry II. Henry VIII appears to have worn the ruby mounted in a ring.
‘During the month of September the Royal Commission for the destruction of shrines, under Dr. John Layton and a strong military guard, arrived at Canterbury to carry out the work of sacrilege. The spoil of jewels and gold of the shrine were carried off in two coffers on the shoulders of eight men, while twenty-six carts were employed to remove the accumulated offerings to God and St. Thomas, and the noted Regale of France was mounted in Henry’s thumb ring.’ (1)
Further evidence comes in the seventeenth via a reliable and diligent source; The Life and Reign of King Henry VIII.: Together with a General History of ..Edward Herbert Baron Herbert of Cherbury wrote ‘Among which, there being one Stone eminent, which it was said, Lewis (sic) the Seventh coming hither from France, Anno Dom. 1179, bestowed; our King (Henry VIII) wore it in a Ring afterwards ‘ (3)
Did Henry VIII wear the ring to his grave in 1547?
J Dalton of Norwich wrote in Notes & Queries (1863) ‘With respect to the large carbuncle or diamond given by Louis VII., which is said to have been worn by Henry VIII in his thumb-ring, it was probably buried with him. If so, this fact may account for George IV, when Prince Regent, having ordered the tomb of Henry to be opened, and the coffin searched for some ring or rings), which he supposed were still to be found therein.
Some years ago, when visiting the Royal Chapel at Windsor, an old man told me that he assisted at the opening of the tomb of Henry VIII, the Prince Regent and a few others being present, and that he heard the Prince speaking about a valuable ring (or rings, I forget which), that he hoped to find in the royal coffin. Nothing however was found, except some large bones.’ (4)

I was hoping for visual evidence for Henry VIII wearing the ruby cabochon ring in portraits, for example that by Hans Holbein in 1540. To date I have found no such evidence.
Did it find its way back to France?
What did it actual look like? Size of a thumb? Big as a pigeon egg? Was it a ruby at all? Gemmology was in its infancy. Misidentification in historic gems is not unknown. For example The Black Prince Ruby set in the Imperial State Crown is actually a spinel.
So where is it now? France? England? Buried with Henry VIII? or was it burnt with the bones of Thomas á Becket?
References:
(1) PRELATES AND PRIESTS, Wall, J. Charles, Shrines of British Saints, Methuen & Co., London. 1905. Chapter Four.
(2) State Papers (ed. 1830), Part ii. p. 583. Polydore Vergil, Relation (Camden Society, 30).
(3) https://books.google.co.uk/books?id=Yc9CAQAAMAAJ&pg=PA376&lpg=PA376&dq=Cherbury%27s+History+of+King+Henry+VIII+ring&source=bl&ots=xOG7bvPbpV&sig=B0rfOXy3f7RBbk3QfZoZOIZA_VI&hl=en&sa=X&ei=DPGzVMCKC8nqaKfWgLAM&ved=0CDIQ6AEwAw#v=onepage&q=Cherbury’s%20History%20of%20King%20Henry%20VIII%20ring&f=false
(4) http://www.mocavo.co.uk/Notes-and-Queries-Jul-Dec-1863-Volume-4/877270/475