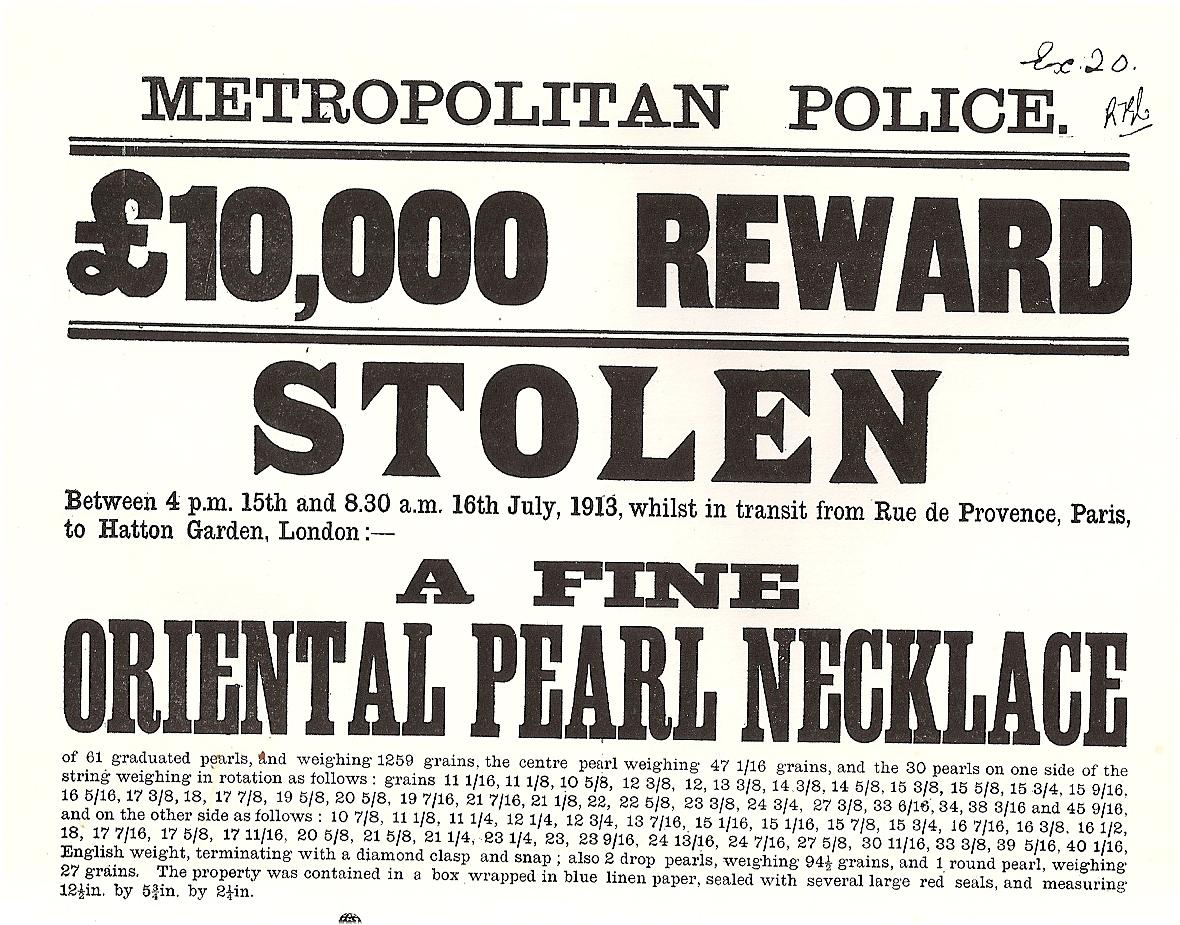 THE GREAT PEARL ROBBERY of 1913

A recent lecture that I attended at the Society of Jewellery Historians at Burlington House, given by Nigel Israel, touch upon the bizarre and intriguing robbery of what was considered to be at the time one of the world’s most valuable string of natural pearls.

Max Mayer was the most highly regarded and respected pearl merchant in the Garden (Hatton Garden).  Mr Mayer had purchased the pearl necklace in Paris for the then astounding sum of £123,000.  To put this figure into perspective it was a time when a loaf of bread would cost one penny.

He was hoping to sell it for £150,000. So why so valuable? These sixty-one perfectly matched and graded natural pearls were of the finest quality and had taken scores of men over ten years to collect. They were described as flawless and of a rosy delicate pink. Very desirable, very valuable.

Grizard was a fence.  However he was a particularly astute one. He remained out of reach of the law, swanning through the Garden smoking a cigar to give him an air of respectability, whilst at the same time receiving stolen goods from his many followers.

To quote a Scotland Yard police report of the time, ‘He is a diamond merchant by trade, but has no established business premises. He does undoubtedly do a little business, but the greater portion of his time is taken up by organising crimes, and buying and disposing of stolen property. Much has been heard of him during the past fifteen years as having been connected with many serious crimes.  A large number of statements made by prisoners are in our possession showing that they had disposed of their property to him, but unfortunately we have been unable to prosecute him for lack of corroborative evidence.’

This untouchable would use his masterly intelligence to meticulously plan and motivate his followers to carry out the most famous and bold theft of the early twentieth century.

Ex-Superintendent Alfred Leach had been for ten years the Inspector in charge of the Hatton Garden division and knew Cammi and his associates well. Leach had become famous by at one time arresting a pub full of criminals. However in 1908 he retired due to ill health and took a position as a private detective among the Underwriters of Lloyd’s.

He worked mainly for Price and Gibbs, who called him to investigate the stolen pearls.

Mr Mayer had sent the pearls to Monsieur Henri Salomons . However no sale was made and the pearl necklace, together with three further pearls, were packaged and sent by ordinary post as not to attract unwanted attention, to:

On receiving the package Mr Mayer was horrified to find that the pearls had gone and in their place a string of eleven sugar cubes. The cubes weighed the same as the lost pearls and were used to waiver suspicion should the package be weighed again in transit.

Cammi’s minions had intercepted the package and carefully carried out the switch.

A reward of £10,000 was posted. The police, Leach and two amateur detectives tightened the net around Cammi and his gang. What followed next, considering the amount of meticulous planning that had been involved, seems bizarre.

Mr Augustus George Horn, described as a piano forte back maker, whilst walking to work from his home in Islington noticed a small brown parcel lying in the gutter.  He saw a couple nearby catching a bus, called out to them but with no response he placed the parcel in his pocket. Later, on his way to the Swan public house in Islington, he opened the parcel to find a matchbox full of what he thought were marbles. He allegedly gave one to a street urchin to play marbles with before depositing the remainder at the police station.

The question is who threw away the package and why?

Of the sixty-one pearls only fifty-nine have ever been recovered.

The necklace was never to be sold as a single piece again. A few years after its recovery the necklace was divided into three items. One sold in London, one in Paris and the final part in New York.

Wouldn’t it be a fantastic idea to reunite the pearls……………..

‘The Great Pearl Robbery of 1913’ by Christmas Humphreys (1929), published by William Heinemann If you are interested in pearls I can do more than thoroughly recommend a visit to the Pearls exhibition at the Victoria & Albert Museum, London.  The exhibition contains many of the World’s most famous pearls. My personal favourites are the Pearl of Asia and the Hope Pearl.

The exhibition runs until the 19th January 2014